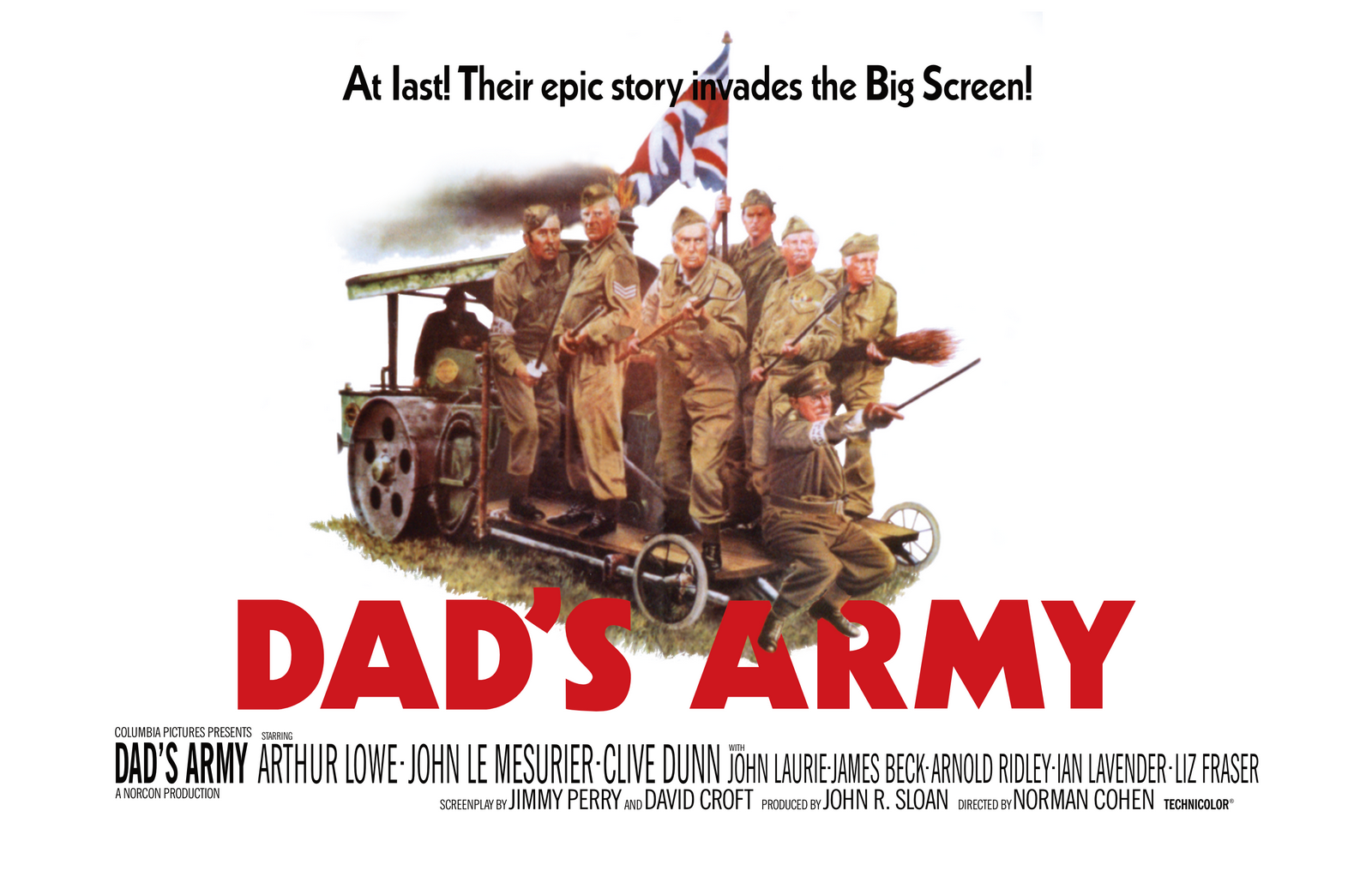 Due to the popularity of the TV series, David Croft and Jimmy Perry were asked to write a feature length version by a young director/producer called Norman Cohen (1936-83) who would then pitch the idea to film backers.
They also provided two episodes on film in advance, these being ‘The Battle of Godfrey’s Cottage’ and ‘Operation Kilt’. After a few rejections, the idea was taken up by Columbia Pictures who agreed to Norman being the director. In his autobiography, Jimmy Perry states that he was taken on as ‘technical advisor’. “David Croft,” he says, “kept well and truly out of it.” It was not a pleasant experience for either of them, although the success of the film prompted them to work on another full-length storyline. If this had come to fruition one suspects David would have elected to produce or at least direct it himself. The two episode film reels would later be found and rescued from a skip by an employee at one of the film companies. They were stored, unopened in his home for many years until discovered and returned to the BBC by a family member following the ‘Lost Episodes’ plea by David Croft.
The increased budget allowed for the recreation of Walmington-on-Sea on location. The village of Chalfont St Giles in Buckinghamshire was selected for this and suitably dressed for the occasion. This decision opened out the film giving a more cinematic feel rather than just an extended TV episode. A backdrop of Chalfont St Giles High Street can be seen through Mainwaring’s bank office window in the episode ‘The Battle of Godfrey’s Cottage’, which pre-dates the film.

Plot Synopsis
Britain 1939, Walmington-on-Sea on the south coast of England. George Mainwaring, Manager of Martins Bank, has to refuse credit to a customer who wants to cash a cheque. The man, a Major- General Fullard, is angered by this and storms off. Later that morning, Mainwaring and his two subordinates - Arthur Wilson and Frank Pike - hear the Rt. Hon. Anthony Eden’s call for a national network of Local Defence Volunteers. They go to the Police Station to sign on, only to find chaos. Mainwaring decides to take charge and reconvenes the meeting at the Church Hall, where he forms the Walmington-on-Sea Platoon of the L.D.V. The first section of the film mirrors the first episode with the addition of the Fullard incident.
From here, all scenarios are unique to the film. The men meet again that evening and as Mainwaring gives a lecture on their aims - despite virtually no means of defence - the Germans across the English Channel are drawing up plans to invade our island shores. One evening, as Mainwaring demonstrates the construction of petrol bombs, two workmen arrive at the Church to remove all but one of the Church Bells, so that they can be melted down for the war effort. The Vicar, an enthusiastic campanologist, cannot resist one last ringing of his beloved bells before they are taken away. Unfortunately, Mainwaring and his L.D.Vs misinterpret this as a warning of imminent invasion by the Germans and proceed to construct a blockade with all manner of household items. After a short wait, they hear the sound of gunshots coming from the town. Instead of Germans, they discover that the shots are caused by the faulty exhaust of the bell workers van.
Members of the Platoon come up with various ingenious weapons for the now re-named Home Guard. These include Jones’ dive bomber rocket gun, Walker’s one-man bullet proof tank constructed from an old bath and finally Frazer’s anti-vehicle device, which, in the event of invasion, could flood roads with oil, making them impassable. However, due to gross negligence on the part of Jones, the machine is activated prematurely, floods the road and causes the staff car of Major General Fullard to skid wildly almost writing it off. Fullard is furious - in fact, even more so when he recognises Mainwaring as the ‘bloody Bank Clerk’ who would not cash his cheque.
The Platoon, now with full uniforms, go on their first weekend manoeuvres in Jones armoured Butchers van. After sleeping in the open, due to an incident with a steam roller. Their exercise is to guard a pontoon bridge on the river. Unbeknown to the Platoon, part of the pontoon has been sabotaged by another group. Private Walker notices the cut rope and Jones and the others try to hold the structure together. Just at this point, Major General Fullard rides his horse, unawares, onto the loose section of the bridge and insists on a salute from Jones and his men. They reluctantly do so, letting go of the rope causing Fullard and horse to drift off slowly down stream. Mainwaring and the Platoon manage to lift Fullard off the horse onto an overhanging bridge, but in the process Jones falls onto the horse and pontoon section himself. He, in turn, is rescued by Mainwaring, Wilson and Frazer, who unwittingly become stranded themselves until later that evening when they run aground in the shallows. It is therefore unsurprising when, the next morning, Fullard informs Mainwaring that his position as leader of the Platoon is in serious doubt after the weekends mishaps.
That same day, a German observer HE111 plane crew have to bail out over the town. They land near the Church Hall, where the Mayor is fronting a meeting, and shortly the townspeople present are taken hostage. Chief ARP Warden Hodges manages to escape and warn Major General Fullard of the situation. The Home Guard arrive back in the Church grounds at this time, and Hodges informs them of the events. Fullard tells Mainwaring and his men to go home as this is a job for the regular Army. However, Jones has the idea that the Platoon could enter the Church via the crypt and surprise the Germans. They do so and once in the Church, disguise themselves as choir members, enter the room and force the Germans to surrender their weapons. By the time Fullard and the re-enforcements enter, the situation is under control. Mainwaring later reveals to Wilson reveals to Mainwaring that the German’s weapon was not loaded. Mainwaring admits that neither was his. However, the whole Platoon are now heroes in the town and his position as Captain of the Walmington-on-Sea Home Guard is secure. But daily life carries on in Walmington-on-Sea....