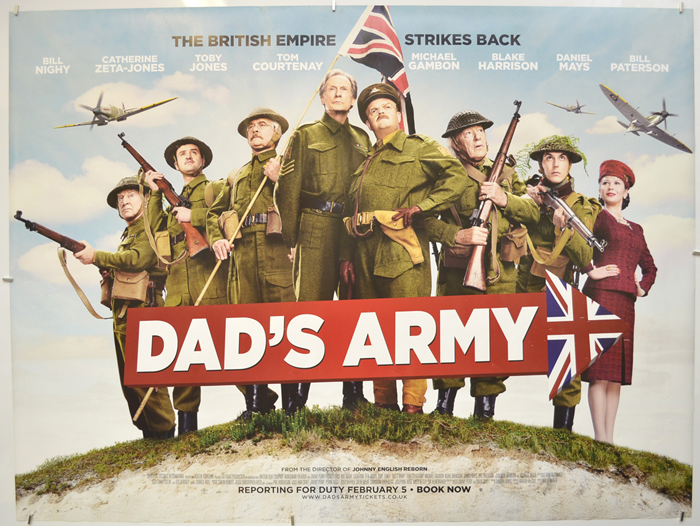 Jimmy Perry let the cat out of the bag regarding a new feature film in October 2012. He was speaking at an Appreciation Society event when he said informed the gathered members;
“I can tell you the red hot latest news that I havebeen working with Ann Croft and we have justfinished negotiating a multi-million pound deal witha film company who want to do another film. I haveno idea what this will be like or who they might cast,I think there is talk of casting a lady in the lead role,who knows what will happen.”
This tit-bit was picked up by the National media and caused an outcry - how dare they replace Mainwaring with a woman! It wasn’t true, Jimmy hadn’t said Mainwaring would be a woman, but the film garnered extensive free publicity in the process. Messing about with a National Treasure was not going to be easy, but the producers filled the main roles with seasoned and well respected actors. The screenplay was written with affection towards the original by Hamish McColl, a long-time fan of the series.
The film was partly sponsored by Screen Yorkshire, which resulted in their North East coast substituting for the Cliffs of Dover. Luckily, they are also white. Filmed entirely on location, filming started on a cold, wet and windy day in October 2014 near Scarborough where the press had already gathered - such was the interest in the new film. Bridlington Old Town was the location for Walmington-on-Sea and the large crowd scenes filmed there on 15 November for the end sequence created even more press attention. Three welcome additions to the film were Frank Williams, recreating his Vicar role, Ian Lavender, this time as a Brigadier and the original Jones’ Butchers Van, looking resplendent after is restoration.
A character who raised the eyebrows of many was Mrs Mainwaring, played by Felicity Montagu. One  of the running jokes in the series had been that the viewer never saw George Mainwaring’s wife and had to build up their own picture of her. Some of the scenes were reminiscent of several TV episodes, particularly where Mainwaring meets Rose in the Marigold Tea Rooms and Godfrey’s ‘open air’ attire in an early scene. Other aspects of the film stray from their TV characters, particularly with Wilson’s background and Jones’ revelations.
The film was premiered in London’s West End at the Odeon Leicester Square on 5 February 2016 with most of the cast present. Jimmy Perry also managed to attend despite a recent illness. Reviews were lukewarm, although Toby Jones portrayal as Mainwaring came in for some praise. Public reaction was much better and theatres reported healthy attendances, with the film still being shown in smaller cinemas long after its February release. The film ended up grossing over $12.8 million

Plot Synopsis
The action commences on a train speeding through the countryside towards the heart of London in 1944. Germany are on their back foot and their spies are desperate to thwart or interrogate any British plans for the invasion of the continent. A spy on the train is followed and cornered on a London rooftop where he attaches a message to a carrier pigeon. Their attempt fails, so they engage agent Cobra, sending her in to Walmington-on-Sea as journalist Rose Winters. The town is close to the suspected invasion base so her cover is to write about the local Home Guard and their exploits.
In similar vein to the episode ‘Wake Up, Walmington’, the platoon feel they are only being used for domestic services rather than national security, as the first scene involving a bull demonstrates. The war has been on for five years and a German invasion seems far off. The Platoon first meet Rose on an exercise just outside Walmington where it is revealed that Wilson was once her tutor at Oxford University Using her womanly ways, Winters beguiles several platoon members to be accepted into the platoon briefings or manoeuvres, although they refuse the latter.
We see the domestic side to several platoon members, and their partners can all see what effect Rose is having on them. Mainwaring buys a Homburg hat that he feels makes him Churchillian and Wilson invests in a new suit. Rose uses this to her advantage. Eventually, the platoon are given a task to patrol the cliffs near Dover (all top secret) and Rose suspects this is important and steps up her efforts to accompany the platoon. MI5 have intercepted a radio signal transmitted to Berlin from Walmington-on-Sea and alert Mainwaring.
Meantime, a couple of town residents, Cissy and Dolly Godfrey, take it upon themselves to investigate Rose Winters who tries to divert suspicions when they get near the truth. Pikes’s girlfriend, Vera discovers Winters with her radio and destroys it, but is gagged, tied up and left on the shore with a rising tide.
Following an incident near the secret base, Mainwaring is stepped down from command but is desperate to make amends and prove himself. Rose Winters puts it into Mainwaring’s mind that it is Wilson who is the spy and he his tied up under suspicion and interrogated in the Church Hall. Cissy and Dolly reveal their findings but Mainwaring does not believe them and follows Winters to the beach where a U Boat emerges. Initially mistaking Mainwaring for Churchill they try to capture him but by now the platoon have arrived and a battle ensues, joined by Mrs Mainwaring and her platoon of ATS girls. During the exchange, they discover Vera in danger from the incoming tide, tied to a concrete bollard, so Pike makes a heroic rescue. Rose tries to swim to the U Boat but gets into difficulties and is rescued by Mainwaring and arrested, much to the amazement of an onlooking Colonel Theakes. At the Walmington Town Parade, Mainwaring proudly leads his platoon, his position and reputation re-instated.