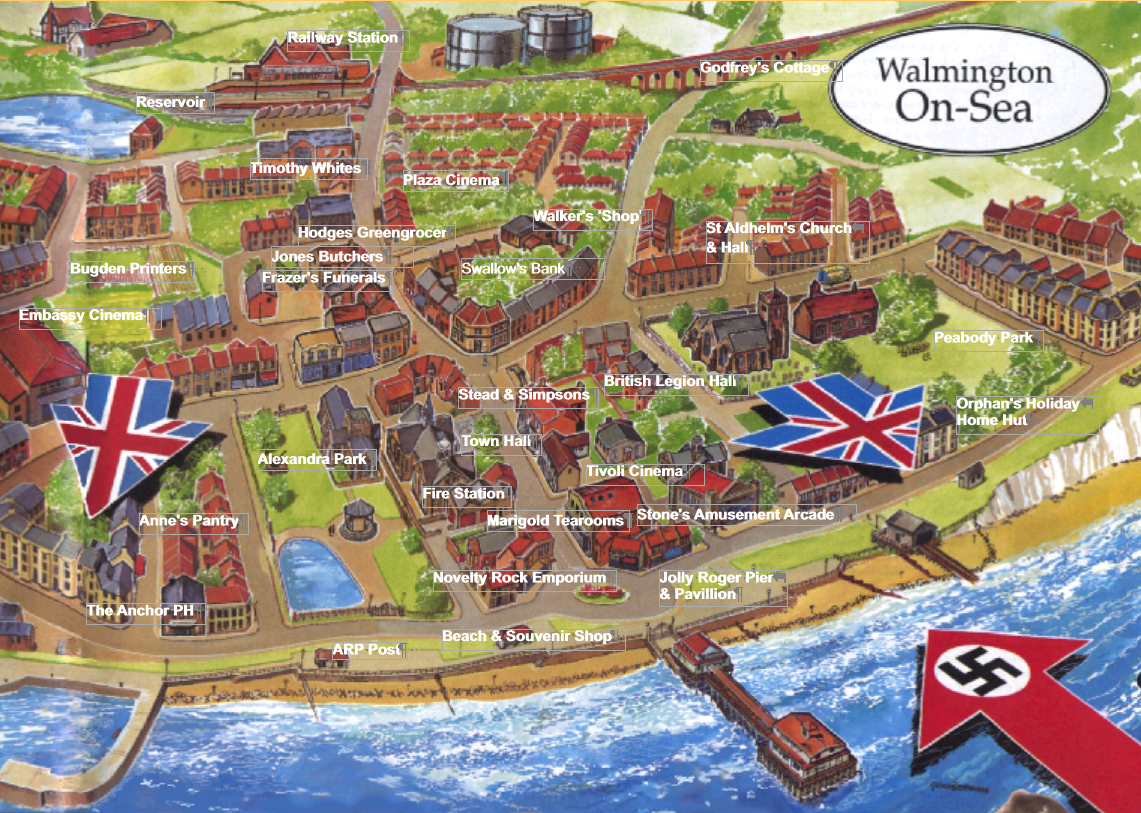 Pre War
The book "Dad's Army, The Defence of a Front Line English Village", describes Walmington-on-Sea as being situated in Sussex, but there is undisputed evidence to disprove this. The town's Police Station is seen to be under the jurisdiction of Kent Constabulary and, from the pens of the authors themselves, "Walmington-on-Sea, set on that strip of Kent coast which endured so much".  The town was a popular seaside resort, with a High Street lined with shops, which supplied the inhabitants and visitors with life's essentials and some of its luxuries.
Although not a fashionable resort, the town was host to a great number of holiday-makers, who mainly stayed in guest houses, of which there were many, catering for all tastes. In common with the best holiday venues, the town had a bandstand on the promenade and a pier, popular with fishermen. On sunny days Mr Bluett, the local photographer, could be seen with his camera on the promenade photographing the visitors as they strolled along, enjoying the sea air. He would supply a photograph of their holiday memory for ten bob which wouldn't faded for at least a week after they got back home! The sandy beach was much in favour with the children, as was Stone's Amusement Arcade and the boating lake. A visit to the Novelty Rock Emporium was a special treat for them, to buy mint rock and giant humbugs.
There were many streets lined with small houses and bungalows, a large number of which accommodated people who could afford to retire to the town to enjoy their declining years in pleasant surroundings by the sea. Sunday services held at the old parish church of St Aldhelm's in Mortimer Road were well attended, the congregation being augmented during the summer months by the more devout of the holiday-makers. The Marigold Tea-rooms, ably managed by Miss Fortescue, where the customers were entertained by Miss Rowland's Trio, provided light refreshments for the visitors, as did Ann's Pantry, well known locally for its Devonshire teas, and the Dutch Oven, further along the High Street. Refreshment of a stronger brew was readily available from the town's numerous public houses, The Dog and Partridge, The Red Lion and the Horse and Groom, to name but a few. The fish and chip shop and restaurant, situated for aesthetic reasons in a back street, was well patronised by both locals and visitors. Evening entertainment was provided by the resident summer concert party in the pier pavilion and the town's one cinema. Walmington-on-Sea was, in effect, during the years between the two World Wars, a typical small thriving English seaside town, its economy relying on visitors and day-trippers.